All the criminals who have been convicted in any crime are given a sentence examination opportunity by the Indian Constitution. 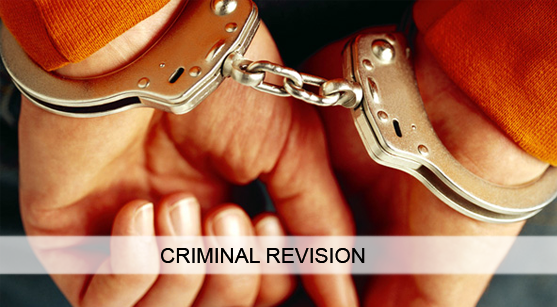 If criminals feel that they have been given sentence by unfair means for any crime which is not committed by them or even if they feel the lower court has been too harsh on them, they have an opportunity to ask the higher court to look into the case for further consideration. In this situation, if the higher court has upheld the appeal of any criminal then the sentence given to the criminal can be revised. As per the process of revision, the case can be re-examined by a higher court where the sentence is ordered by a lower court, to check if the judicial power has been exercised properly or not. This also involves rectification of the order, if found.

In simple terms, a criminal revision is a court procedure where revision and rectification can be done of the ordered sentence.

The defendant who has not committed a crime but still was subjected to the sentence by the court, the court may have to pardon him/her with due respect.

In many situations, if no good advocate/lawyer defended the criminal and this chance was by taken by the other advocate due to lack of proper advocacy, the other advocate may ask for a high degree of sentence including heavy fines which the defendant has to pay.

In this scenario, the Criminal Revision law ensures that all the criminals who have committed a crime and have been proved should get justice as per their deeds.

The law also ensures that these criminals are treated not too harsh and not too soft, depending on their punishment. Hence, the criminal here has the chance that he can appeal to a higher court through his advocate for the revision of his punishment. As per the criminal revision process, the high court can further go for investigation of the case and can also bring any revision in the decision if it is required.

The process of criminal revision requires great efforts of work and investigation since the advocate of the defendant has to challenge the decision which has been ordered by the judge of the lower court according to the law and order of Indian Constitution. In the revision, the advocate has to prove that the decision was incorrect and it needs further rectifications.

What are the provisions for criminal revisions according to the Criminal Procedure Code?

For exercising the powers of the criminal revision process, the Sessions Court or the High Court owns the rights to look into the records so that it can look for necessary investigations and rectification. It can call for all the records which were involved during the proceedings. Also, it can order to eliminate any sort of injustice. The records which were involved in the proceedings are called by the High Court or Sessions Court, are not only for the trail but can also be for the prevention of the crime. This indicates that all the records of the proceedings can be called for the purpose of examination in revision which was used in the lower court. This can be done by the higher court for the satisfaction of correctness. Therefore, as per Section 397(1) of CrPC, the Sessions Judge has the power to examine the situation related to the inadequacies in the sentence. During the process of criminal revision, Sessions Judge or High Court can bring all the powers in action which have been given to them under Sections 386, 389, 390 & 391 of CrPC. In case of no adequate interference ground, the petition for revision can be dismissed by the revisional court.

The revisional court (Higher Court) can consider additional evidence for ensuring justice under the order. This power of the Higher Court is not arbitrary discretion but is only used to make sure that the justice should be given. The reasons for using this power are required to be recorded by the court. This power is highly exclusive and should not be used for covering up any retrial.

It is clear that if a person appeals for the criminal revision, he can get a chance of bringing correctness in the judgment or the order depending on the records and proceedings.

In many situations, a criminal has been sentenced too harsh by a lower court against the crime. By filing a petition for criminal revision with the help of his or her advocate, the criminal can further knock the doors of a higher court for further consideration and investigation into the case. Here, the criminal lawyers play a key role and if the lawyer is able to prove the decision of the lower court wrong, then there are chances that the higher court may consider the case for rectification as per the process of criminal revision.

The  Advocate in Chandigarh (AIC) is capable of bringing out such procedures by understanding the seriousness of the case. We have constructed a team of advocates who are dedicated and are legally qualified to deal with such situations. We have been able to lodge several appeals in a Higher Court for criminal revision and the result has been in favor of our clients which included fair treatment and justice by the Higher Court as per the law and order of Indian Court.

India has one of the most thorough Constitutions in the world. And being the largest democracy, Indian citizens enjoy the privilege of certain rights, which make the law and order scenario in India...
Read more

The Indian Constitution has provided as fundamental rights to choose your livelihood, faith, place to reside and similar things that are necessary for a peaceful and happy life. If any of those th...
Read more
DEFEND YOUR RIGHTS