If the case is presented in the High Court and the Court finds that any aspect related to the case is incorrect or needs to be rectified, the court can quash or dismiss the case proceedings altogether. This usually happens when insufficient evidence or incorrect trial grounds have been presented by prosecution or complainant party. There are many circumstances under which a case can be quashed. Only criminal proceedings can be quashed by the High court.

The request to quash a case may be made by the victim of the prosecution or accused. Usually, depending on the severity of the case and the facts associated, a case may be continued or quashed, based on Court’s understanding. If the degree of offence is extremely high and the accused (petitioner) makes a move to quash the case, the request is usually rejected. The petitioner’s (who file the case) request can be cancelled if the Court feels that their reasons are weak and the accused will be punished by the trial court. 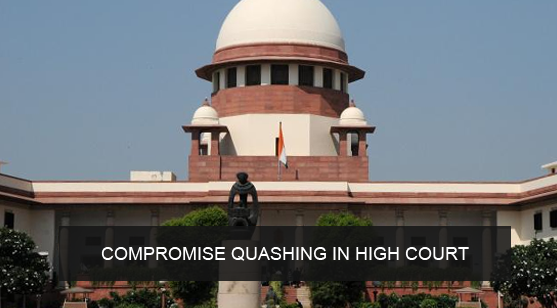 There are instances when the accusing party and the complainant reach a compromise between themselves. It may be a personal, out of court settlements. This is a common scenario in matrimonial dispute, property dispute and petty matters. If such an understanding is reached between both parties, then the case may be quashed by the Court. Rape and murder charges, however, once levied cannot be quashed, as per a recent ruling of the Supreme Court. Even an out of court settlement would not help in these cases. The settlements too should be done in consent of both parties and their lawyers to ensure no one is defrauded in any case.

In cases which do not affect the public at large or where a compromise reached by the parties satisfies the court, the case is quashed. The idea is that a wrong impression is not given to the public by letting criminals get off easily with the quashing and at the same time, lengthy and unnecessary legal proceedings can be avoided.

COMPROMISE QUASHING- A CRIMINAL CASE CAN BE QUASH BY COMPROMISE

WHAT IS QUASHING AND HIS EFFECT ON CASE ?

HOW CRIMINAL ADVOCATE IN CHANDIGARH CAN HELP IN QUASHING OF COMPLAINT