Special Marriage Act of 1954 was passed by the Indian Parliament for providing special marriage for the Indian citizens and for all Indian nationals residing in foreign countries and this is irrespective of the faith or religion that is followed by either of the parties. This Act is said to have originated from a legislation piece that was proposed during 19th century. 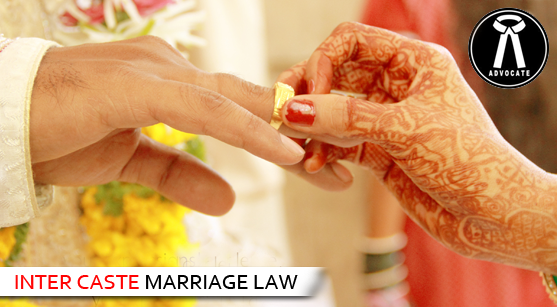 This new enactment does have three major objectives, which is:

Inter caste marriage and its application

• On any individual, irrespective of faith and religion

• Muslims, Jains, Buddhists, Sikhs and Hindus also can perform marriage under this Act.

• Christian, Jewish, Parsi or Muslim religions also can perform marriage under this Act.

• Inter caste Court marriage is carried out under this Act.

• The Act is applicable in whole of Indian Territory, excluding states of J&K and extends to those intending spouses, living abroad and are Indian nationals.

• Marriage is performed under Special Marriage Act of 1954  is a civil contract. Accordingly, no ceremonial or rites are required to be performed.

• It is important for the parties concerned to file Intended Marriage Notice in specified form to Marriage Officer of district of which, one party needs to reside for a minimum of 30 days preceding immediately date, from when the notice has been issued.

• On expiration of 30 days, marriage could be solemnized, unless there is any kind of objection by anyone.

• Marriage could be solemnized at specified marriage office.

• Also, marriage would not be binding on both the parties, until they state the solemn oath of being lawful husband and wife before three witnesses and the Marriage officer.

• Bridegroom is to be 21 years old while bride needs to be 18 years minimum.

• Both the party should be monogamous.

• Both need to be competent taking into consideration their mental capacity and need to give proper consent to the marriage.

• Both the parties are not to fall within any prohibited relationship.

There are competent advocates present, who can help the would-be couples to get married under this act and make the entire process smooth and simple. Since he is qualified and knowledgeable enough about the prevailing laws, he would make sure that no issues arise from it and the couple is married happily. At the same time, it is equally important for the couples to be educated on these laws and the guidelines that need to be followed by them in order for their marriage to be valid and be accepted by the society and law.

The advocates who have a vast experience in this domain first try to understand the case of the parties concerned and accordingly find out a solution that would be in their best interest. The marriage that is solemnized under the guidance of the qualified advocates, under the special marriage act stands valid and legal.

Understanding all about Anticipatory bail
Child Marriage is Illegal