Act on domestic violence 2005 is a first of its kind and most crucial act in India to assist victims of domestic abuse particularly for women. This act is enough to make domestic violence as a punishable offence and for imparting emergency relief to the victims, besides providing legal course of action.

Till 2005, provisions to provide relief in the domestic violence cases in the civil courts pertaining to divource and criminal courts vide Section 498A of the Indian Penal Code was restricted. In fact emergency relief provided was extremely less and the solutions which was provided was just confined to matrimonial proceedings. In fact even the proceedings in the court was enough to linger to extremity leaving victims totally at the compassion of the abuser. And there was no relief to women who were involved in outside matrimonial relationships. It is against the backdrop of the same that the Protection of Women from Domestic Violence Act was passed. 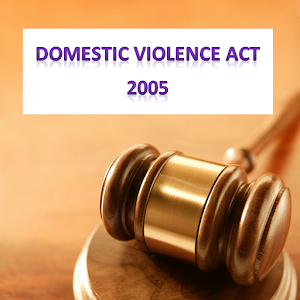 As per the Section 3 of the act any act/conduct, commission or omission that causes injury or harm falls under the purview of domestic violence. This law includes acts of sexual, physical, emotional, verbal, psychological, and economic abuse or threats of the same.

Any women who is a victim of domestic abuse has right to reside in the shared household with her husband or a partner even though when dispute is going on. This prevents abusive husbands to throw their wives out of their home. Yet according to the law if women feel the necessity of the same, she can be provided alternate accommodation and in such a case, her accommodation and maintenance has to be paid by her husband or partner.

According to this law, no one can prevent women for filing a complaint/application against her abusive husband. She has all rights to the assistance and services of the Protection officer and Service providers which is predetermined under the provisions of law. Women can gain services of the police, shelter homes and medical assistance and also file her own complaint under Section 498A of the Indian Penal Code. And as per Sections 18-23, she has also many options for legal recourse like Residence Orders, Protection Orders, , Monetary Relief, Custody Order for her children, Compensation Order and Interim/ Ex parte Orders.

In case husband violates any of these rights of the woman, he will be liable for offence and have to face punishment. Aggrieved wife can file charges under Section 498A. Besides these offences are cognizable and non bailable and punishment can exceed to one year imprisonment or a fine of Rs 20,000.

Domestic Violence has always been a serious offence but with the provision of the act now women are heaving a sigh of relief and are fighting for their rights too.

Protection of Children Against Sexual Offenses: 2011