Criminal Force to women with intent to outrage her modesty

Criminal Force to women with intent to outrage her modesty

Section 354 speaks of outraging the modesty of a woman.  When an accused with corrupt mind stealthily touches body of woman it would make out an offence of outraging modesty under Section 354 Indian Penal Code even if woman may not be aware of touch by the accused.

The word ‘modesty’ has not been defined in the Indian Penal Code we may profitably look into its dictionary meaning. According to Shorter Oxford English Dictionary (Third Edition) modesty is the quality of being modest and in relation to woman means “womanly propriety of behaviour; scrupulous chastity of thought, speech and conduct”. The word ‘modest’ in relation to woman is defined in the above dictionary as “decorous in manner and conduct; not forward or lewd; shamefast”. Webster’s Third New International Dictionary of the English language defines modesty as “freedom from coarseness, indelicacy or indecency; a regard for propriety in dress, speech or conduct”. In the Oxford English Dictionary (1933 Ed.) the meaning of the word ‘modesty’ is given as “womanly propriety of behavior; scrupulous chastity of thought, speech and conduct (in man or woman); reserve or sense of shame proceeding from instinctive aversion to impure or coarse suggestions”.

The essential ingredients of the offence under Section 354 of Indian Penal Code are as under:-

i.  That the person assaulted must be a woman;

ii. That the accused must have used criminal force on her; and

iii. That the criminal force must have been used on the woman intending thereby to outrage her modesty

iv  That intention and knowledge of the accused are the ingredients of the offence and not a woman’s feeling. 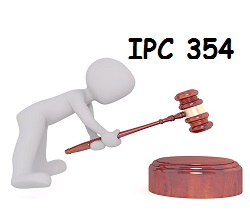 A person’s act can fall under this section as crime –

The act of pulling a woman, removing her dress coupled with a request for sexual intercourse , is such as would be an outrage to the modesty of a woman and knowledge that modesty likely to be outraged, is sufficient to constitute the offence without deliberate intention having such outrage alone for its object.

Here are examples of the offence of section 354 IPC –

Allegation on accused under section 376 IPC and 511  IPC

Ram Shanker, a resident of village Kanhai had a daughter (name not disclosed being prosecutrix) aged about 7 years. On 24.3.1995, at about 2.00 p.m. she had gone to answer the call of nature in the Gatwar, where she fell prey in the hands of the accused who tried to commit rape upon her. The screams of the prosecutrix attracted Omwati wife of Har Pal. At this, the accused fled away towards the fields. On the basis of the aforesaid statement made by the complainant, a case under Section 376 read with Section 511 Indian Penal Code was registered against the accused. Consequently, it was investigated and ultimately challan was presented in the Court.

In the evidence Girl clearly discloses that she was taken forcibly by accused and her clothes were removed and that the accused inserted his fingers into her vagina forcibly and caused damage.

Observation of the Court –

It would be worthwhile to mention here that penetration of the penis in the private part of the girl is essential requirement for completion of the offence under Section 376 Indian Penal Code and the diminished gravity of the offence where some attempt has been made by fingers, certainly may not fall within the purview of Section 376 read with Section 511 Indian Penal Code. At the most, it would amount to an assault to womanhood, therefore, the offence would fall only under Section 354 Indian Penal Code and if any damage is caused to the vagina then the accused could be convicted and sentenced for simple or grievous hurt as the case maybe. A similar point came into consideration before this court in case Nanak Chand v. State of Haryana, 2006(1) RCR(Crl.) 14 (P&H), wherein it was observed that in the circumstances when the accused undressed himself as also the prosecutrix and lay naked on her and thereafter he fled away on seeing the mother of the prosecutrix, the accused could be held guilty at the most under Section 354 and 342 Indian Penal Code and it did not amount to attempt to rape.

Alleagtion against the accused under section 354 and 509 IPC

After about 10 minutes Shri K.P.S. Gill(accused) got up from his seat and came and stood directly in front of the prosecutrix, standing straight but so close to her that his legs were about four inches from the knees of the prosecutrix. The petitioner allegedly made an action with the crook of his finger, asking her to stand and said, “You get up. You come along with me.” The prosecutrix strongly objected to his behaviour and told him, “Mr. Gill, how dare you! You are behaving in an obnoxious manner, go away from here.” Whereupon the petitioner repeated his words like a command and said, “You get up! Get up immediately and come along with me.” The prosecutrix looked towards the other ladies and all the ladies were shocked and they became speechless and could not utter any word. Thereafter the prosecutrix felt apprehensive and she became frightened as the accused had blocked her way. Then the prosecutrix immediately drew her chair back about a foot and half and quickly got up and turned to get out of the circle through the space between her and Mrs. Bijlani’s chair. Whereupon the petitioner allegedly slapped on the posterior of the prosecutrix. This was done in the full presence of the ladies and the guests.

In the evidence complainant said – “After about 10 minutes, Mr. K.P.S. Gill got up from his chair and he came over where I was sitting and stood in front of me directly in front of me. His legs were about four inches away from my knees. I was sitting in an armed cane chair. He made a gesture of his finger towards me to ask me to get up and come along with me. I objected very strongly and I told him, ‘How dare you! You are behaving in an obnoxious manner. Go away from here.’ It made no difference to him and he repeated his words like command. He had very lewd expression on his face and he said, “You get up.” He made same gesture again and asked me to get up and come along with him immediately. I looked at the other ladies. The other ladies were speechless. I did not know what to do and I felt frightened and felt apprehensive.

“Then I found that he was going to pull me up. In reflex action I pulled the chair back as far as I could about 1½ ft. and 2 ft. and I quickly got up and tried to get up from the circle. At that stage he hit me on the posterior in front of everybody. He hit me on the posterior with his hand. I felt very intense and shame and humiliation for this immodest slap. He did it intentionally knowing well. According to me he knew fully well that in Indian society any self-respecting woman will feel outraged at such an act which is against all canons of decent behavior.”

Observation of the Court –

Chief Judicial Magistrate, Chandigarh, vide a lengthy judgment came to the conclusion that the petitioner was guilty of the offences under Sections 354 and 509 of the Indian Penal Code, and convicted and sentenced the petitioner in the manner as stated in the earlier portion of this judgment. The judgment of the learned Chief Judicial Magistrate has been minutely perused by me so as to work out if there is any illegality or material irregularity so as to warrant interference while sitting as a Court of revision. Aggrieved by the said judgment and order, the petitioner filed an appeal before the Court of Sessions Judge, Chandigarh, who vide the impugned judgment confirmed the conviction of the petitioner, both under Sections 354 and 509 of the Indian Penal Code, but modified the sentence awarded by the learned Chief Judicial Magistrate in the terms as stated above in the present judgment.

Classification of Offence – The offence under section 354 Indian Penal Code is Cognizable, non-bailable and triable by the magistrate.