By AdvocateIn Chandigarh
Posted February 2, 2021
In Court Marriage In Mohali
0
0

Every states have own style of work and they can adopt own style but no one can change the main aim of the work. Like this every state/district have different- different Performa of Court marriage. We are living in tricity Chandigarh, Panchkula and Mohali. We are here taking about Court Marriage in Mohali.

As we describe above that Court marriages are solemnized under Special Marriage Act. Every state has duty to provide proper facility to their citizens so every state appointed an officer in the district for performance of marriage under Special Marriage Act. In some states this power is given to the SDM (Sub-Divisional Magistrate) and in Some States this Power to given DC( District Collector). Every SDM and DC can solemnize the marriage of the person who lives in his/her jurisdiction. For Example if you want to perform Court marriage in Mohali then bride or bridegroom (Any one) should be resident of the Mohali.( Any part of Mohali like Zirakpur, Derabassi, Baltna, Dhakuli, Lalru.) 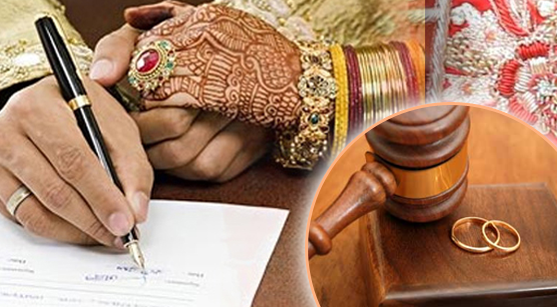 Procedure of court Marriage In Mohali –

Role of Tehsildar in court marriage in Mohali –

In court marriage parties have to sworn an affidavit (individual) that information given by them in the application for marriage is true and correct and they didn’t hide anything from the office of marriage’s officer. That affidavit should be attested by the Tehsildar, without attestation of Tehsildar application of marriage could not move ahead.

The marriage may be solemnized at the specified Marriage Office.

Both parties along with three witnesses are required to be present on the date of registration/Solemnization.